He could have been named Márton Godowski. Indeed, if instead of choosing America his family had emigrated from Eastern Galicia to Hungary like so many other Jewish families at the time of the Austro-Hungarian Empire. And so it was that in the latter half of the 1920’s, my friend came into this world as Martin Goode (the family having “Americanized” their surname earlier) in New York as a third-generation real American. Yes, he was my friend. For at the time of my “great adventure”, near the turn of the century, when I had been serving in Norfolk (VA) as a NATO officer, as the first Hungarian to do so, he had extended his hand in friendship. He and his wife Paula, who was of Hungarian ancestry, had helped my wife and me get acclimated to the New World.

We first met at a reception, when my NATO colleagues introduced me to everyone, the new man from Overseas, from a post-communist country. I was introduced to Martin, or “Skip”,as those who knew him well called him. He was an easygoing, lean but fit gentleman in his early seventies. I soon found out that Skip had served as a naval aviator. As a young man, he had fought over the skies of Korea in the early fifties, flying the F4U Corsair, an aircraft developed during WWII and perhaps in that time the last piston-engine fighter plane ever used by the US military. 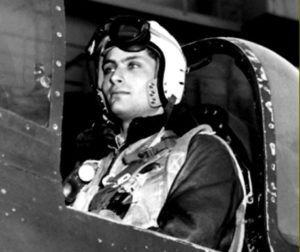 Because of his youth, Skip had just missed serving in WWII, but by 1950, by the time of the Korean War, he was involved. But more about those exciting happenings later. For now let me just say that both my wife and I were tremendously grateful to be surrounded by so many American-Hungarians, people who, in those first few months, offered us an incredible amount of help. We were in need of their help. Approaching our fifties, we were new arrivals to an unfamiliar but friendly multinational environment. While I was learning the ropes at the Supreme Allied Commander Atlantic (SACLANT), Skip’s wife Paula eagerly took my wife to the enormous shopping center on the naval base, familiarizing her with what she could find on the shelves. Slowly but surely, through these friendly get-togethers, we found out more and more about each other. 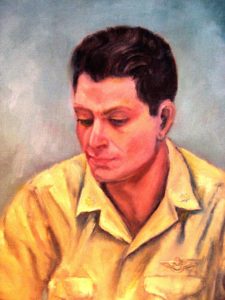 Following Korea, jetfighters were introduced, but Skip was not retrained to fly them. He switched to flying helicopters instead. Sometime in the 1970’s Skip retired as a training pilot, having achieved the rank of commander (lieutenant colonel). But like almost all American officers, he continued his work as a civilian after retiring from the military. 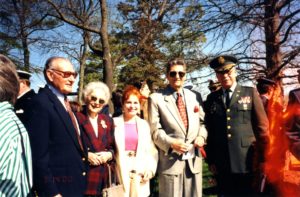 During my time it was pleasure celebrating this reat moment with our new American- Hungarian friends and their spouses.

Farewell but not good-bye!

Upon moving home to Hungary, we stayed in touch with our American friends. We were overjoyed when less than a year later Skip and Paula decided to visit us. We took them all over Hungary, trying to “pay back” all that we had received from them in Norfolk. Following that trip, our main form of communication was once again e-mail, with the occasional phone calls. 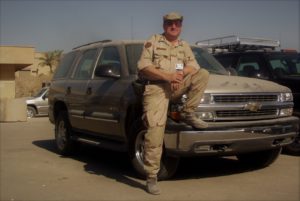 During my mission I would call Skip from Iraq in 2003/2004, using the phone network that the Americans had set up. Our calls always ended with his brotherly admonition to “keep your head down”, to stay safe.

A few years later, on the occasion of the 10th anniversary of my American assignment, my wife and I embarked on a “nostalgia” trip to the United States, now as retirees, and we spent some days as Skip and Paula’s guests at their home in Virginia Beach. Organizing many common programs, they took us to “Sunday Brunch” at the famous officer’s club at Fort Monroe, where afterwards they showed us how beautifully they could dance Argentine tango. Even at the age of 80, Martin took care of himself. He never missed his tennis matches, either. 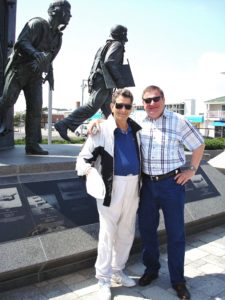 One day it was a pleasure to drive out with him to see the memorial to the Marines and Naval Aviators close to the ocean in the newly inaugurated memorial park. It was there that he first went into detail about his time in Korea.

He had been a member of Fighter Squadron 32 (VF-32) aboard the USS Leyte aircraft carrier, from where day after day he and his squadron mates launched dangerous attacks against the enemy, returning to the carrier often at sunset.

During our visit we also attended the veteran pilots association reunion together. It was a pleasure to see the love and respect that these old pilots had for each other, even as their numbers dwindled as the years passed. 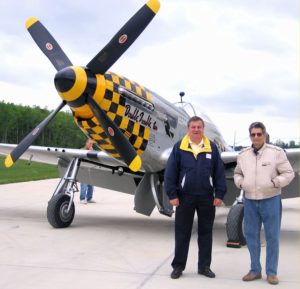 Skip and Paula would return to Hungary two more times. Perhaps the most unforgettable occasion took place on their final visit, when I invited them to the 60th anniversary celebration of the founding of the Hungarian Air Force Command and the subsequent reception. It was nice to see when two old fighter pilots, the American Skip Goode and the Hungarian László Bihari, who had once flown in 50’s the MIG-15 for Hungary, embraced each other. For them that gesture perhaps signified the true end of the dangerous Cold War era.

As the years passed, news from Skip came more slowly. Both Paula and he were having health problems. Particularly Skip’s heart was acting up. A few weeks earlier our mutual friend Jack had written an email to me: “I’m sure you would want to know. Skip’s in the hospital again. Presumably on his deathbed…”

News began to accumulate on the internet, with family members posting daily updates about Skip’s condition on Facebook. They were usually short posts or photographs. There was once a reference to one of the Korea War’s most heroic incidences, apropos of Adam Makos’ bestseller Devotion. The post informed that Martin was also in the book. Feverishly I began searching for the book on the internet and was startled surprised learn that the book had been translated into Hungarian language.

Within days I had the book in my hands, which chronicled the story of Jesse Brown, Tom Hudner and my friend Martin (in book named Marty). 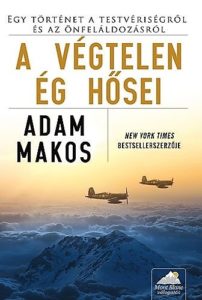 Reading the book I thus began a race against time. I devoured the young author’s exceptionally well-written book. I wanted to finish the book before the cruel but expected news arrived. The basic story itself is actually familiar even to Hungarians. Set at the Battle of the Chosin Reservoir in Korea in December 1950, it is the tragic yet heroic story of Jesse Brown, the first African-American aviator in the U.S. Navy, and Lieutenant Tom Hudner, his wingman, who intentionally crash-landed near Brown’s shot-down plane in order to pull him from the wreckage in time.

We know that the rescue attempt ultimately ended in failure. But Tom Hudner’s heroism could be an example for any generation. I eagerly looked for my old friend’s role in this heroic epic. I had already decided weeks before that if Skip passed away, I would make every effort to commemorate his memory with the dignity it deserved. I did not have to search long in the exciting action-packed book for Skip’s appearance. His was a cheerful persona who enjoyed the company of the ladies. For all intents and purposes, he is the book’s third main character, often returning to the heart of the story. He is also a participant of the fiercest battles. Skip was present on that tragic December day, as part of another formation, attacking the Chinese troops bearing down on the Marines. He was also the first one in the Leyte’s briefing room who, still in his flight suit and ready to go, heard the news: Jesse’s crash-landed! And Tom’s by his side! 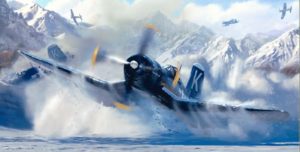 When Skip first told me this tragic and heart-wrenching story, I asked him, “And what became of Jesse’s remains?” Skip answerd: “Well, we went back in daylight and circled above him. We could see Jesse in the wreckage. And that the Chinese had taken everything from him, even his jacket. And then we dropped napalm on the crash site…” What a horrific yet simultaneously uplifting funeral for a pilot! I could think of but one other funeral so worthy of a hero, from the legend of the Knights of the Round Table, King Arthur’s ship set ablaze and launched to sea.

By the time I got to the end of Skip’s story, the inevitable had happened. Martin “Skip” Goode, he who was so capable of loving, passed away on February 14th, 2016, leaving us on Valentine’s Day. 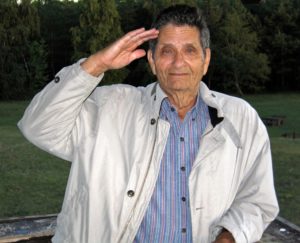 My friend, my brother-in-arms, my comrade! May you rest in peace. 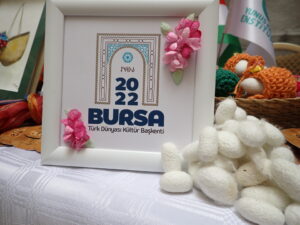 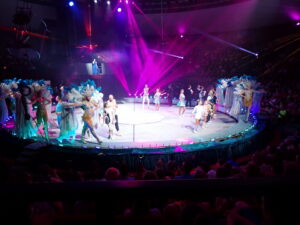 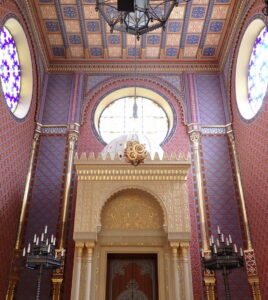 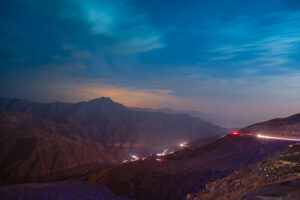 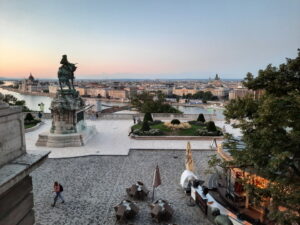 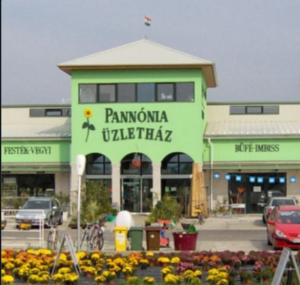 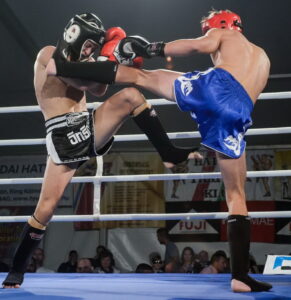 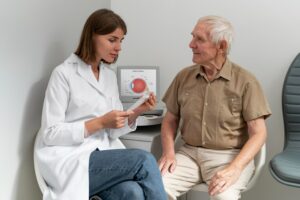 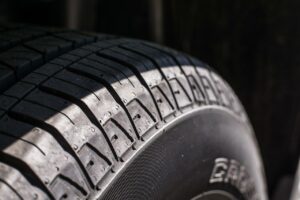